Almost made it home with new rig...

Almost made it home with new rig...

Sunday, Nov 15, my son Nathan and I went to take delivery of my new to me 1987 J20 pickup truck.
This was Rick Bielec (aka Ricbee) old Michigan-rust covered plow truck.
This truck has brought the definition of 'rust' to a new low.
We tried and tried to get it started, but it would not roll over.
We removed the starter and came home.

A few days later, I took the starter to O'Reilly's where it was tested and determined it was froze solid. (more rust?)
This Saturday, we went back, installed a new starter, a new starter relay and with a fresh battery, it fired up.
It ran okay, major exhaust leak and the choke would not not completely kick off and ran at a fast idle.
...but it did run!
We raised the plow and took off.
After a full tank of gas, we headed south, back home to Fort Wayne, Indiana.

Cruising along, the temp gauge began to rise to nuclear meltdown levels.
At the Pilot Truck stop at north Monroe, MI, about 17 miles from where we started it overheated.
We inspected the thermostat, hoping it was just froze shut, but of course, it was open, just like it was suppose to be.
Cooled off and with some fresh coolant, we begin to limp it home.

After another 8 miles or about three more exits, we got as far as south Monroe when it overheated for the second time.
However, this time the top tank on the radiator separated from the core.
Our trip was over.
Here we are loaded on my trailer and going home defeated. 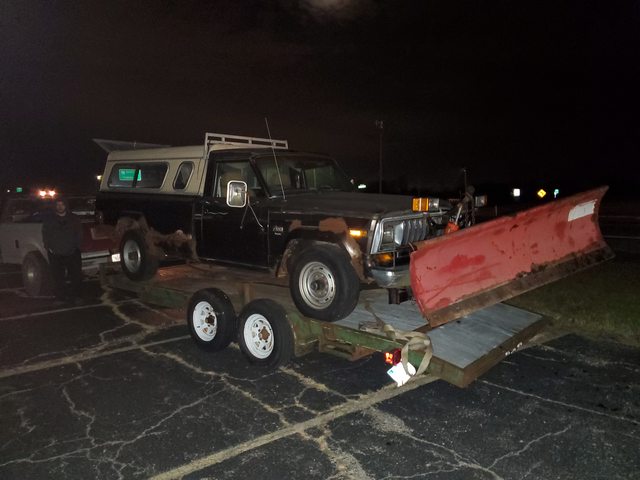 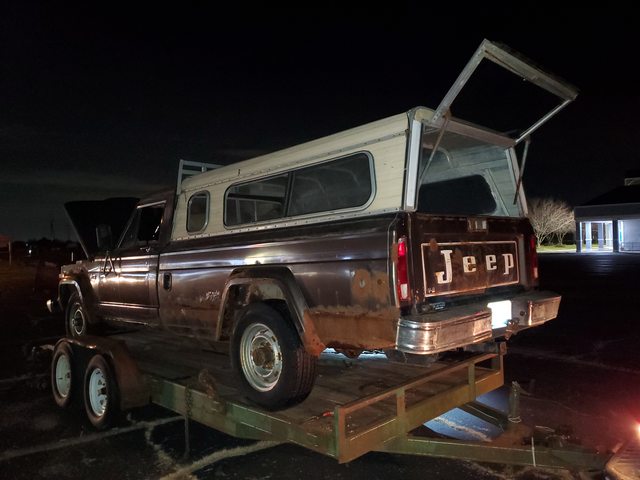 Nice! Good luck with your project.

You aren't kidding about the rust!
Top

Sounds like an episode of RoadKill. Where they break down five times in the first ten miles