Day 1 of the Mordor trip I took in back in September is now up. Enjoy, George.

But... Mordor is where shadows lie...

That trailer being so light sure bounces around a bunch. Did it seem to handle the bumps ok?

That trip was the first trip out with the trailer. I had already figured that I was going to have some issues with the small tires on the Harbor Freight trailer. I had aired down the tires to 12lbs. at the beginning, but had to air down again to 8lbs to try and keep it from taking a beating. It still bounced around quite a bit at times. I included the worst of what I caught on video in this video.

When I got home I inspected the trailer and found I had some canvas delamination at the body to frame spacer locations. There apparently was a lot of flex in the floor at these locations so I installed what I call a inner frame rail, but could be called a base board on the inside to connect the spacers and spread the load across the floor better. I also decided to move up to a bigger tire/wheel. I moved from a 20" tire to a 24" tire, the biggest I could go without changing hubs. This made a big difference on the next trip. No other issues as of yet.

The trailer is a test bed to see just how far I can take a foamie. Skeptics said that foamies would blow apart on the freeway....We have proven them wrong. Now it is time to invade the off road scene and see what can be done. Future plans are for a 3500lbs axle with brakes and tires/wheels to match the Cherokee. A longer tongue is planned that will also extend all the way to the rear with a rear receiver hitch. Lock and Roll hitch, tongue box/carrier, roof rack. Should still be well under 1000lbs.

This is my first foamie I built. It came in a 510lbs including the tongue box. 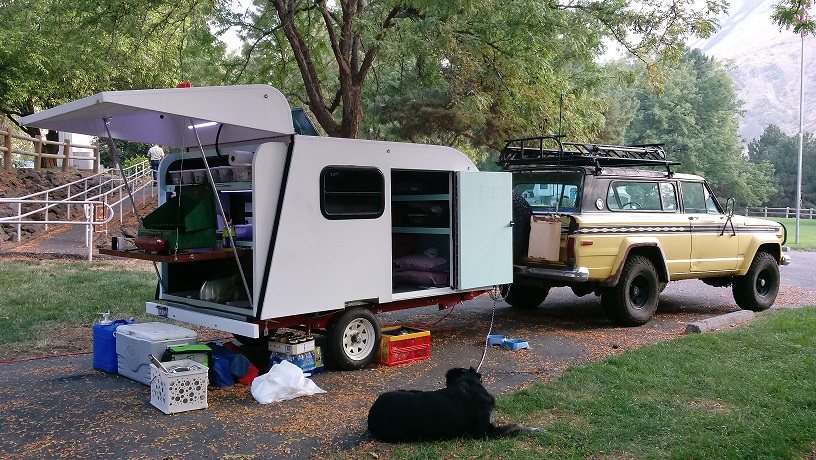 Day 3 is up. Thanks for looking. George.

Last day of the Mordor trip is up. Thanks for watching. George.