Show off your FSJ photos and videos!
Post Reply
13 posts • Page 1 of 1

Just thought I would introduce myself and my J10 Pickup.

I recently inherited this truck from my dad, because he bought a new rig to use going up to his property.

The truck was painted in the 90’s and it was sold at an auction somewhere around Ontario, Oregon. Supposedly it had a big winch on it during the auction, but the buyer didn’t realize that was a separate auction. My dad had seen it driving around beforehand and said it was an awesome looking rig with the combo. A couple years later, it came up for sale and he jumped on it.

It was supposed to be my fist rig and was purchased for me when I was 13, but the rear axle broke back when finding parts on the internet wasn’t what it is today. An axle was made for it at a shop in Portland/Salem Oregon after sitting for 7 years, but by then I had moved out and gone to college. Before the axle broke, I spent a lot of great times driving it on back roads through the woods and high desert areas of Eastern Oregon on adventures, hunting and fishing. 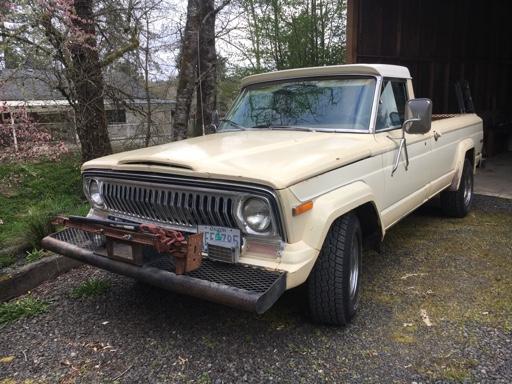 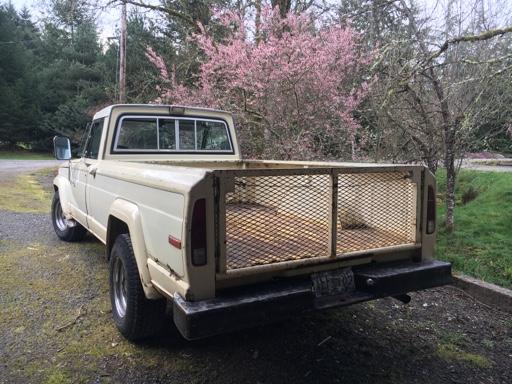 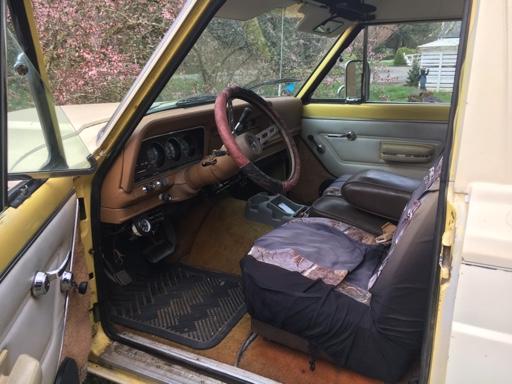 It has the factory 401 engine with the Th400 BW1339 Quadratrac combo. The ignition system has been converted over to points and condenser, and an Edelbrock 650 carb feeding the fuel. Smog equipment was mostly all removed and blocked off by PO. Factory A/C, but I don’t know if that has ever worked, or even been charged, while it’s been in the family. It has cruise control that I was informed worked once, but it is has been disconnected since the carb swap.

I have lots of projects, so I’m not sure when some of this will take place, but I would like to start by doing some basic maintenance and start finding some of the missing/broken parts for the interior.

Replace the broken exhaust manifold (thank you repair shop that screwed my dad when replacing the flywheel) and maybe build an adapter to delete the exhaust heat riser. Might need to rebuild the transmission and would like to replace transfer case gaskets and refill with correct fluids (not sure if it correct right now...).

Truck needs new leaf springs in the front, at least, but considering a lift. Might get some good factory height replacements, and save up for a lift kit, tires and wheels. Leaning towards the skyjacker, but a lift is definitely not a must have and might be years out.

Would like to re-jet the carb and find some easy trays to get a little more performance out of the motor without breaking the bank, but that’s also not a must have at the moment. For right now, I just want to keep it running good and maintained and use it as a fun Friday commuter and house/yard project supplies hauler.

Grew up in Burns, Oregon working side-by-side with my dad on all our cars/trucks/projects. I guess you could say I caught the “bug” for tinkering and working on my own vehicles. My dad likes to say he can “see the potential in anything, and I find that true myself. Might be why I have several vehicles and countless projects...

Headed to college at Oregon State (Go Beav’s!) and since then have worked as a test engineer for a forklift company near Portland, Oregon. Not a huge fan of the big city life, although it does have its perks, so we live outside city limits near Sandy, Oregon. Still enjoy exploring the backroads, hunting, fishing and spending time with my family. That said, I’m looking forward to my next adventure and time in the woods!

Welcome and enjoy the sickness. You have a nice truck with a great history.

Great story, thank you. Enjoy it and good luck on all your Jeep projects!

Thank you men. Its definitely been bringing back some memories and I'm enjoying cruising it around town. Not used to driving an older truck and being the one noticed by other drivers. I'm usually checking out the oldies on the road, without being noticed by their drivers, but driving around the j10 I've been caught off guard realizing they were staring, pointing, praising the J10. It's nothing special, but you definitely don't see many FSJs on the road anymore.
1976 J10 - 401, TH400, BW1339
1974 Ford F250 - 360, Manual, 4x4
1949 GMC FC150, 270 I6, Manual
2004 Nissan Xterra, Lifted, Manual
2002 Kawasaki KLR250
Top

Welcome. I might have some parts you need. I'm in Portland on the east side. I'm currently working on an 81 Cherokee project.
91 Grand Wagoneer
89 Grand Wagoneer
Top

78 WIDETRAC wrote:Welcome. I might have some parts you need. I'm in Portland on the east side. I'm currently working on an 81 Cherokee project.

I went to Sandy twice in the past month to get FSJ parts. My build is on IFSJA. I enjoy both forums but felt it didn't need to be on both. Yeah, keep in touch. I'm sure I have extra parts to you could use.
91 Grand Wagoneer
89 Grand Wagoneer
Top

I was looking at this again and realized the original color is Sunshine Yellow. One of my favorites. My dad had a Sunshine Yellow Gremlin. My first Waggy was a 76 401 in the same color and interior. I used to walk around in the Padre Island sand dunes in the middle of the day just to scout around and maybe find something worth picking up. I could see that yellow Jeep at my camp site miles away. Then one day I walked back into camp to find a fishing line was down. I reeled it in and the bait had been picked clean off the hooks. Dangit. Been awhile since I posted my intro.

Since then I had a wiring cookout and had to do some repair work. Ended up pulling out the cluster and and found melted wires to and from the ammeter. Pulled off all the electrical tape and removed everything toasted.

Cab repairs and mods
- Wiring into the steering column signal switch. Bought a newer signal switch kit with an adapter and rewired the dash harness for the new connector using most of the spade connectors on the old harness(duty heavier duty compared to new ones!)
- Retrofitted the cluster to have a voltmeter instead of the original ammeter. This was pretty straight forward using the tech page article.
- Cleaned up wiring, re-taped harness, cleaned and dielectric greased all terminals and replaced bulbs. Pretty awesome to have ALL interior lights working including the cluster, ash tray, clock(correct 2x/day) and glovebox! 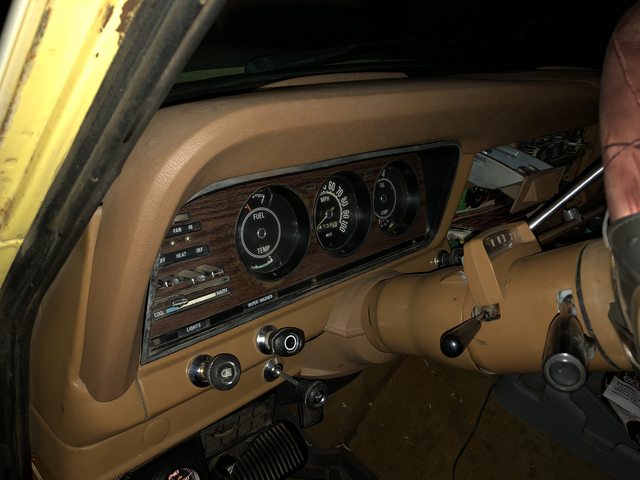 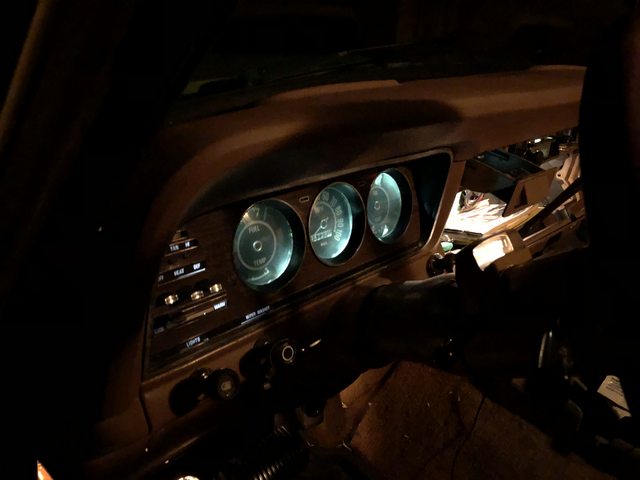 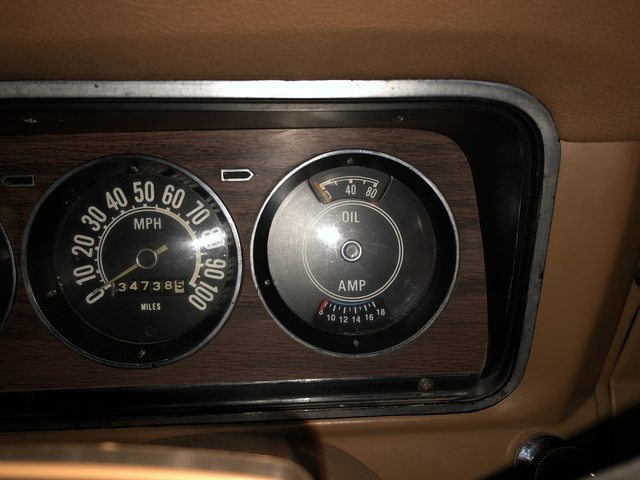 fulsizjeep wrote: ↑
Sat Apr 18, 2020 6:43 am
I was looking at this again and realized the original color is Sunshine Yellow. One of my favorites. My dad had a Sunshine Yellow Gremlin. My first Waggy was a 76 401 in the same color and interior. I used to walk around in the Padre Island sand dunes in the middle of the day just to scout around and maybe find something worth picking up. I could see that yellow Jeep at my camp site miles away. Then one day I walked back into camp to find a fishing line was down. I reeled it in and the bait had been picked clean off the hooks. Dangit.

Sounds like you have some good memories! Wouldn't trade my FSJ memories for anything!

I have an addiction to FSJs since 1980 and jumped on the chance to get a Rust Free J10 for my son's first vehicle. He drove it for 8 years and when he relocated due to work I bought it off of him. I've had it for 2 years and have been restoring and modifying it. You can see the Shop Truck at YouTube https://www.youtube.com/results?search_query=The+Slab64
Top
Post Reply
13 posts • Page 1 of 1